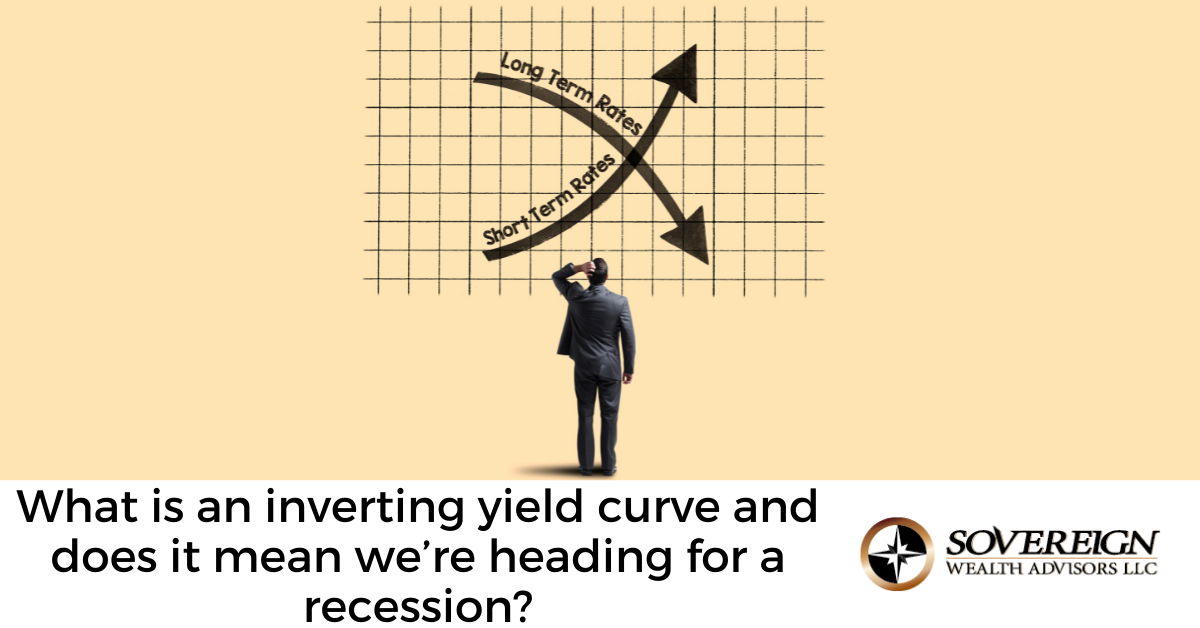 What is an inverting yield curve and does it mean we’re heading for a recession?

What is an inverting yield curve and does it mean we’re heading for a recession?

One key predictor of downturns in the economy is what is known as the yield curve. This typically refers to the market for what the US government borrows, by issuing bonds and other securities that mature over different time horizons ranging from weeks to 30 years.

Each of these securities has its own yield (or interest rate), which moves up and down in inverse proportion to the security’s market value – so when bonds are trading at high prices, their yields will be low and vice versa. You can draw a chart that plots the yields of securities at each maturity date to see how they relate to one another, and this is known as the yield curve.

In normal times, as a compensation for higher risk, investors expect higher rates of interest for money they lend over a longer time horizon. To reflect this, the yield curve normally slopes up. When it instead slopes down – in other words, when it inverts– it is a sign that investors are more pessimistic about the long term than short term: they think a downturn or a recession is coming soon.

This is because they expect the Federal Reserve, the US central bank, is going to cut short-term interest rates in future to stimulate a struggling economy (as opposed to raising rates to cool down an economy that is overheating).

Most closely watched is the relationship between two- year and ten-year US treasury debt. The so-called spread between these two metrics can be seen in the chart below, with the grey areas indicating recessions that have tended to follow shortly after.

Spread between two-year and ten-year treasuries

As you can see, the yields of these two securities are getting very close to being the same, and the trend suggests that the two-year will soon have a higher yield – meaning the curve is inverting. The key question is, does an inverted yield curve hint at an upcoming downturn? Not necessarily. Let me explain why.

One complication is that bond yields don’t only reflect what investors think about future economic growth. They also buy or sell debt securities depending on what they think is going to happen to inflation. It’s generally assumed that prices will increasingly rise in the years ahead, and investors need to be compensated for bearing that risk, since higher inflation will erode their future purchasing power. For this reason, bond yields contain an element of inflation premium, normally with an increasingly higher premium for bonds with longer maturity dates.

The following chart shows the spread between the inflation expectations built into 10-year and 2-year treasuries. The fact that it is in negative territory suggests the market thinks that inflation may fall, and this may also explain why yields on longer-dated treasuries are lower than on shorter-dated ones. And although inflation would fall in the event of an economic slowdown or recession, there could be a situation where inflation fell but the economy remained buoyant. Hence a yield curve inversion doesn’t have to mean that we are up against an imminent recession.

Another factor that is potentially affecting the yield curve is the Federal Reserve’s moves to buy government debt as part of its quantitative easingprogram (QE). The idea behind QE is that by buying long-term bonds, the Fed is able to keep long- term interest rates low, which decreases the rates on mortgages and other loans, thereby stimulating the economy. Conversely, when sold, lending rates will go up and economic activity will be reduced.

Earlier in March, the Fed started raising the benchmark US interest rate and stopped the asset purchases under the QE program that it launched in 2020 in response to the COVID pandemic.

But it also indicated that it would only start selling these assets after several months of hiking the benchmark rate. Since the benchmark rate is a short- term rate, the yield curve inverting might indicate market expectations that short-term interest rates will be higher than long-term ones for the foreseeable future.

Which yield curve should we consider?

It is also sometimes argued that two-year/ten-year spreads are not the most useful ones to watch, and that instead one should focus on yields at the shorter end of the yield curve. In this set up, if you look at the difference in yields between two-year and three-month treasuries, it is actually steepening: in other words, it is hinting that economic growth is going to increase in the short term.

Economists sometimes argue that these near-term yield curve movements have stronger predictive power than those further out. At the very least, the fact that these are saying something different shows the need to be careful because different data about treasury yields can depict a different (or even opposite) picture depending on what time horizon you are considering.

To summarize, it doesn’t necessarily follow that an inverted yield curve will be followed by a recession. It certainly could mean that, in which case unemployment would likely rise and inflation would potentially come down more quickly than many are expecting. But for now, it’s too early to say. The debt market is certainly signaling that change is coming, though it’s often easier to say in hindsight what it meant than at the present time.

The opinions voiced in this material are for general information only and are not intended to provide specific advice or recommendations for any individual security. To determine which investment(s) may be appropriate for you, consult your financial professional prior to investing.

Past performance is no guarantee of future results.

Yield Curve is a line that plots the interest rates, at a set point in time, of bonds having equal credit quality, but differing maturity dates. The most frequently reported yield curve compares the three-month, two-year, five-year and 30-year U.S. Treasury debt. This yield curve is used as a benchmark for other debt in the market, such as mortgage rates or bank lending rates. The curve is also used to predict changes in economic output and growth.

Bond yields are subject to change. Certain call or special redemption features may exist which could impact yield.

Inflation is the rate at which the general level of prices for goods and services is rising, and, subsequently, purchasing power is falling.

Quantitative Easing (QE) refers to the Federal Reserve’s (Fed) current and/or past programs whereby the Fed purchases a set amount of Treasury and/or Mortgage-Backed securities each month from banks. This inserts more money in the economy (known as easing), which is intended to encourage economic growth.

All information is believed to be from reliable sources; however LPL Financial makes no representation as to its completeness or accuracy.

This article was prepare by RSW Publishing.

RSW Publishing has an agreement to republish this author's content.